Occasionally in life we witness someone else do something so incredible, it gives us permission to suspend our own limitations and dream about what we ourselves might be capable of. That is exactly what happened in the summer of 2017 when a great friend of mine – Matt Turnbull – completed seven back-to-back ‘iron-distance’ triathlons in seven days. It was a truly remarkable achievement and as I saw Matt run down the finishing shoot joined by his two children, I made the decision to take on the Ironman challenge myself. I signed up to the challenge with a full twelve months of training ahead of me; I was committed to give it my all, and resolute that I would make the grade.

I am no stranger to exercise. I’ve completed multiple marathons and ultra marathons over the years and I cycle for fun. The Ironman challenge is however quite different, and arguably the most challenging one day event there is. You finish the day with a 26.2 mile marathon, preceded by a 112 mile bike ride. With training, all this was very doable, but the day also starts at 6am with an open water swim in a chilly lake of 2.4 miles. Herein lay my greatest challenge for I was a non-swimmer, prone to panic attacks in water.

Many people asked me why I bothered signing up when I knew I couldn’t swim. The idea of a triathlon had been suggested to me many times before and I had always used my inability to swim as an excuse not to take on the challenge, but the inspiration gained from following Matt led to a change in mindset. I decided that I was going to use the Ironman challenge as the reason to learn to swim, rather than as an excuse not to, although at the age of 48, I did wonder if I’d left it too late!

I asked my friend, Triathlon Coach Dewi Winkle, to help me get used to the water. He joked initially that he had some armbands but soon he realised that every buoyancy aid was needed when I couldn’t do more than two or three strokes before I’d stand up, panic stricken and gasping for air. Thankfully, with time and persistence (three swim sessions per week), I managed to get moving. I became very well known to the lifeguards at my local pool and they always looked slightly more alert when I arrived poolside! The panic attacks did not and have not completely gone away, but with repetition and a clear picture of myself completing ‘the distance’, I battled on.

Eight months into my twelve-month schedule and I could swim just one length of crawl, and by nine months, I could swim only two. Dewi then introduced me to swimming open water in a wetsuit, which was an experience, and also to the concept of swimming with others. By now I had just a month to go and I was beginning to question whether this was going to be possible, but I’d invested so much and was determined to continue. I had trained twice a day, every day, for a year, and I’d only missed four sessions due to international travel. There was no way I was going to throw in the towel now. So instead I kept practising, right up to the wire. 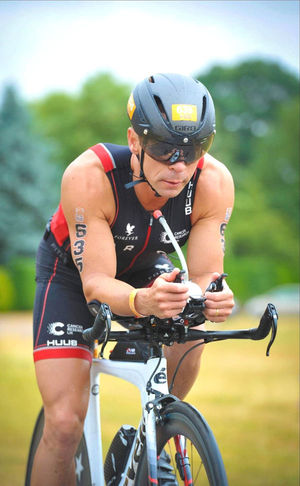 The day of the race came, and it was an early alarm – 3am – as I had to get a full meal in before the race started at 6am. I kept thinking how a panic attack whilst swimming amongst 1,600 enthusiasts in cold water was more than possible, and my family were under strict instructions not to come and spectate until they could see from the live tracker that I had successfully completed the 2.4-mile swim. If you can recall the summer of 2018, you’ll remember that it was blistering hot; however, on July 29th, it was only 9˚C and raining continuously. There was also winds of 70mph scheduled for the whole day, so I knew I had the additional challenge of negotiating waves! As the race began, I intentionally kept towards the back, as the start can be notoriously rough with athletes getting kicked, punched and ducked if you are in the way. Despite this, I didn’t let myself focus on what might go wrong; instead I just pictured the end of the swim and concentrated on my breathing and a steady stroke. Incredibly, the swim went really well and although by most experienced athlete’s standards it was a super slow swim – I completed the 2.4-mile course in 90 minutes – I was really chuffed.

The bike ride was tougher than I expected. As you start and finish in the same place, the head winds should have been countered by the tail winds, but I’m not entirely convinced they were – it felt like there was a head wind most of the time! As a result, my bike leg was slower than planned and it took a bit more out of my legs than anticipated but still I managed to do the 112 miles in 5 hours and 50 minutes. As I neared the end of the bike section, my emotions were mixed. Knowing I’d completed two out of three sections of the race was great, but anticipating I had a full 26.2 miles left to run was quite scary. However, I was determined to be resolute.

As the miles ticked by, I continued to stick to my plan, and I maintained a good pace right up until I only had 3 miles to go. For some reason, at this point, I had an overpowering urge to stop. Thankfully, I had loads of support from family and friends in the crowd; they’d toughed it out all day to cheer me on and it’s thanks to them that I was able to complete the marathon, in the most horrible of conditions, in 4 hours and 15 minutes.

I know that it’s thanks to great coaching and an iron mindset that I was able to finish strong, and I am proud to say that I crossed the line with my two boys as they were allowed to join me for the last 200 yards of the race. So, will I stop here? Certainly not – this year I’ve already booked in to take part in a half-ironman challenge in Staffordshire in June. It may be half the distance, but my aim is to #BeResolute and push for an even faster time!

Are you continuing to #BeResolute like Mike? Let us know what you are doing in the comments below.

Click below to stay up to date with the latest articles.

This facility is only available to Subscribers.